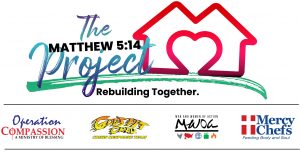 When Steve and Willastine Woods woke up on Easter Sunday of this year and had a sunrise service on their front porch, they had no idea that later that same day their home would be destroyed by a tornado.

After seeing the damage firsthand, Randy and Terri knew that GPC had to return to help rebuild in some way.

In May, after searching and interviewing families, God’s Pit Crew let the Woods family know they were selected and told them that we would build them a brand new home, free of charge.

Steve and Willastine’s daughter, who lived next door, also lost her home during the tornado. While on the site of the destroyed homes, Terri felt led by God, to not just build one home, but two.

Matthew 5:!4 states “You are the light of the world. A town built on a hill cannot be hidden.” Steve, Willistine, and their daughter Shanda’s homes sat on top of the hill in their neighborhood. God’s Pit Crew decided to name this project after the verse because these two homes will be beacons of light in this neighborhood.

For two weeks in October, GPC volunteers worked tirelessly to rebuild Steve and Willistine’s home. On October 17, they were presented with the keys to their brand new, fully furnished home.

GPC will return at a later date to build Shanda’s home and complete the Matthew 5:14 Project.

Watch below as Steve and Willastine see their home for the very first time!

If you would like to donate and help us raise funds to completely rebuild the second home, please visit godspitcrew.org/donate and designate your gift for the Matthew 5:14 Project.