The Miracle in Chokoloskee

By Brandon NucklesJuly 3, 2019No Comments 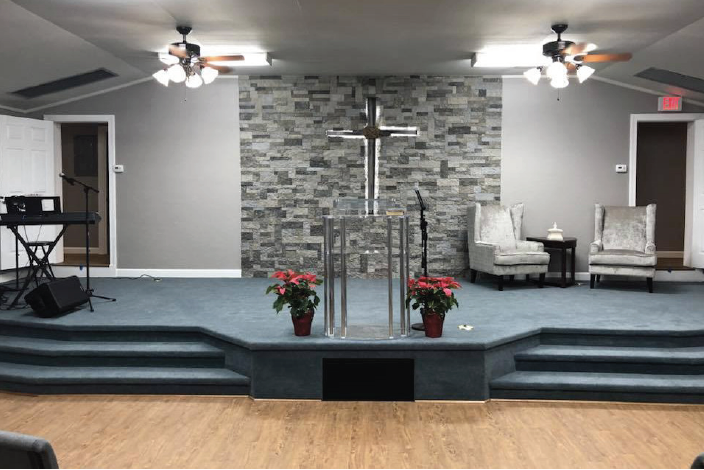 Hurricane Irma Destroyed this little island town in Florida. Soon after the storm, GPC showed up to lend a helping hand and to restore hope to the town by rebuilding their church.

The small island of Chokoloskee, Florida, was just one of many areas completely devastated by Hurricane Irma. “We were told that we were going to have some flooding. I do believe they warned us that it was going to be intense, probably something that we’ve never seen before…not in at least 60 years, so we prepared as best we could,” said Lynnette Morris, pastor at the Chokoloskee Church of God. Lynnette was born and raised in Chokoloskee, met and married her husband right out of high school, and raised her children there. After attending the church for several years, and serving as the associate pastor, Lynnette now serves as the main pastor for the church. Once residents of Chokoloskee learned about the storm headed their way, they began to prepare as best they could.
“I knew I couldn’t leave my people…I opted to stay here with my congregation. The day before the storm hit my husband said our lives are about to change forever,” said Lynnette.

Twenty-four hours later their lives did change forever. Two-thirds of the community had lost their homes and businesses, Lynnette’s church, parsonage, and youth facility were destroyed. “As soon as the hurricane and the winds died down some, we took a drive here in a boat to assess the church and the damage. We found about six feet of water here within the sanctuary and in our youth facility.

The youth facility was a complete loss and had to be torn down. The church was completely gutted and nothing was salvageable…we had to start over from scratch from the ground up. When I think back about it now, it was just a moment of shock and awestruck…it just didn’t seem real at first.” Lynnette says she will never forget the moment she met God’s Pit Crew for the first time.

“I heard about God’s Pit Crew when they showed up in my sanctuary one day. It was a moment where I like to describe it as we were sitting in our ‘spiritual ashes’ It was just a moment of complete devastation for us, and we were having a difficult time, and they showed up right at that moment when we were at a place of despair.

I met Randy and a few others, and they assessed the church with me, and I told them I don’t know how to do this or where to begin but I know that God is with us and we will see a restoration.”

One night Lynnette and her husband, Caleb, were sitting on their porch feeling a little overwhelmed with the disaster. Lynnette got a word from God that a miracle was on its way.

“As we sat there looking at each other, my phone rang and it was Randy from God’s Pit Crew and he said ‘Pastor Lynnette I want you to know that the Lord has spoke to me and also to Phil from Men and Women of Action, and we have made a commitment that we are going to rebuild your church,’ and he told me it will be unto the glory of God. When I hung that phone up I knew that this was already done, that our miracle was on its way.” Three months after Hurricane Irma destroyed the church, God’s Pit Crew volunteers arrived to rebuild Chokoloskee Church of God. “We had God and God sustained us. In our darkest moments, God’s Pit Crew showed up. In a spiritual way, they just held our hands and walked us through the process of how you recover from this process. This entire group is full of people that surrounded us with hope and courage.”

A large volunteer team, led by GPC volunteer Warren Johnson, worked for two weeks to restore the beloved beacon of hope on the island. The newly rebuilt church was dedicated on Friday, December 15, 2017. Pastor Lynnette and her congregation were in awe of the transformation. “If it wasn’t for God’s Pit Crew, this small community wouldn’t have a mighty house to come to. We are still sitting in a disaster area, but now we have a congregation and we have a church that is beautiful… we have a place we can come now,” said Lynnette.